What is the first thing that comes to mind when you thing of queer media?

Now, narrow that down to how much of that centers around lesbians.

Maybe you think of The Haunting of Hill House, Euphoria, or even Blue is the Warmest Color. It was pretty hard to think of though, huh?

Queer women in the media, specifically lesbians, have always been a hard find. It’s even harder to find a realistic version of ourselves as lesbians while it is aggressively stereotyped and troped as one dimensional, villainous, or promiscuous characters.

Women have always been oversexualized by the media, being seen only as objects for male consumption – (insert sexy lamp joke here). Despite the fact that lesbianism has literally nothing to do with men, media depictions of lesbians have to appease the male audience. It can be seen in the specific tropes in movies and tv; like the lesbian kiss episode and bait-and-switch lesbians. Bait-and switch is when a t.v. show or movie teases the idea of a queer relationship through affection and flirtatious behavior, without any intention of following through. It is similar to queerbaiting but the difference is that producers, writers and directors will hint a queer relationship, but then do not actually depict the representation to attract in associated audience.

Because of the male gaze, any media centering around lesbians tends to be very sexual. Unfortunately, there aren’t enough queer people in media to change it. Lesbians need to be marketable and normalized to heterosexual audiences, but with its continued hyper-sexualization, that’s never going to happen.  Lesbianism is more than sex, and not something that should be kept hidden. If we can have gay love stories between men, then why can’t we do that with women? Queer women can never just be people. There are so many different archetypes that we’re forced into to make us palpable.

If seen at all, lesbians are forced into tropes that demean our queerness, and continue to push the superficialness of women in the media. Tropes like “lipstick lesbians”– where the women is conventionally attractive, femme, and hyper sexualized. Or, the “straight lesbian”, a.k.a the lesbian who just happens to find a man that they’d go straight for. That particular trope supports the degrading, harmful idea that queer women just “need the right man” to “fix them”.

Very little representation of lesbians in the media actually involves lesbians. It is very often that these movies and t.v. shows are directed by men or straight women with straight actors playing lesbians. Overtime, we have seen more queer representation in the media beyond the staple  gay best friend (GBF), but diversity remains an issue. Straight people are taking the easily digestible parts of the community to focus on aka white, cisgender gay men. Then, the little representation queer women do get, it is overwhelmingly white. The norm of white homosexuality takes up so much of the media in every single part of the community, it’s startling. Even the shows that appear to be more diverse like Orange is the New Black feature very few POC lesbians. And disabled lesbians? Practically unheard of.

It should be noted that lesbian relationships are different then straight ones. Some media will try and shoehorn one of the women into the “masculine role” or butch- usually assigning her the breadwinner, and having her seem more dominant in the relationship. Her partner will therefore  fall into stereotypical “feminine roles” such as catering to her partner, staying at home with the kids, and generally making her more “submissive”. Fundamentally, you can’t just write a straight relationship and then just switch the guy out and have the relationship be the same.

As we move toward a more diverse and inclusive society, it is important that what we show is accurate. In doing that we need to make these relationships real and believable, we have to let queer women have a voice. No matter how “diverse” you believe you are, it means nothing if it is not accurate and comes from real experiences.

Accurate lesbian depictions exist, but know it may not come in the form of tv or movies. A lot of good representation lives in books and podcasts. Books are not nearly as filtered as anything filmed. Writing a book is a completely different process than producing a film or show. There are less people to answer to, or rules to abide by. In our modern day where nearly everyone has endless access to information, technology and the Internet, anyone can start a podcast.

You should want to understand the lesbian experience, but also recognize that the queer women in your life are not here to tell their life stories. Just like it is inappropriate to ask your black friends to share their hardships and prejudice, it may be inappropriate to ask your queer friends about theirs. The internet is a big place with thousands of people sharing their stories. Start there, and embrace the spectrum of people, stories and experiences.

If podcasts are your thing, here are some good ones to start out with:

That does seem a bit daunting so here are some good books:

Life-Changing I vividly remember how eager I was to embrace a fresh start in high school. High school was emboldened to be this rite of

What is the first thing that comes to mind when you thing of queer media? Now, narrow that down to how much of that centers

You Should Really Get FULLY Vaccinated, and I’m Going to Try to Explain Why

Fast forward a year and a few months and here we are. There is a bright, shiny, golden light at the end of this dreary

It’s unfathomable just how heated the debate is between pro-life and pro-choice is. I am a devoted pro-choice advocate because I  believe everyone has their

Mind, body and soul.  This isn’t just a cheesy cliché slapped on the back of a bottle of kombucha. It’s important to care for them, The Heartbreaking Reality in Yemen

When learning about the Holocaust during World War II, I’m sure you remember questioning how the world allowed such atrocities to take place. The narrative 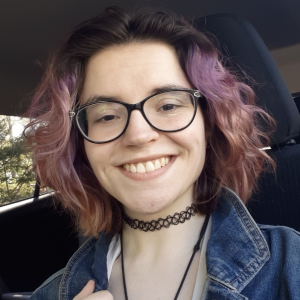 A 19-year old lesbian, undecided college student.
All Posts »
PrevPreviousYou Should Really Get FULLY Vaccinated, and I’m Going to Try to Explain Why
NextInspiring, Life-Changing Advice to Surviving High SchoolNext